It's that time of year again: If you want to know about the history of changing vowel sounds in music because it's gonna be May, this blog post from Ace Linguist goes deep: https://www.acelinguist.com/2020/04/its-gonna-be-may-historay.html

(The Atlas Obscura article it links to is worth a read as well for a shorter explanation of the phenomena, even though it conflates two sounds that Ace points out are different.)

Did you know that the official US Code of Federal Regulations and Federal Register websites have robust free public APIs with full text and structured metadata? My work team uses them, and they're great: https://www.ecfr.gov/reader-aids/ecfr-developer-resources/rest-api-interactive-documentation (text of the federal regulations) + https://www.federalregister.gov/reader-aids/developer-resources (the "proposed rules" and "final rules" that update the regulations).

Another makerspace question: how to best set up a comfortable computer workstation for a wide range of people-sizes and laptops, inexpensively, not taking up too much space? We have adjustable desks and chairs. I can bring a Bluetooth keyboard and mouse. Thinking about getting an adjustable-height laptop stand like https://www.obvus.me/products/laptoptower instead of a monitor + webcam + various video input/output adapters?

There's not much information about it online, but it may be in the bad overlap between second-system effect and the risks of classic government waterfall-style software projects. USDS and 18F started around the same time as this project, in 2014, and they hadn't yet worked out software procurement methods that work better. Now there are tested methods (https://derisking-guide.18f.gov/), but the user-facing TreasuryDirect system is still stuck in 2002, and I can't find any estimates about an update. 😭

If you've looked at buying I Bonds since they have a good interest rate (https://www.treasurydirect.gov/indiv/research/indepth/ibonds/res_ibonds.htm), you've run into TreasuryDirect, which is the Treasury's 2002-era application for "retail investors". It's terribly outdated and makes buying bonds a big hassle.

Do you have a lot of craft/art materials, such as paint/ink/dyes, yarn, etc? Or a lot of electronics components and equipment, like soldering irons?

How do you organize your supplies to make them easy for you to use? Send me pictures or links? I've been working on organizing everything at Double Union, and I'm up for suggestions. Some of it: https://www.instagram.com/doubleunionsf/

For example, I found this post helpful for figuring out what to do with our paper: https://thehomesihavemade.com/how-to-organize-paperwork-part-4-crafting-papers/ Hey girlfriend, let me tell you about radon

‪I was tidying my room tonight, and this involved carefully hanging up all the belts and sashes and materials for my reasonably-historically-accurate pirate costume‬ based on http://takebackhalloween.org/anne-bonny-mary-read/ , and it made me happy. I’d been going to make a Brigid costume for Halloween this year, after having so much fun dressing as the Morrigan last year, but I’m totally just going to work more on my Mary Read. 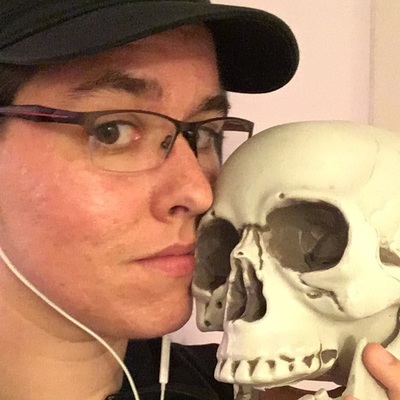 ‪While reading the 1985 Quilt Digest with lunch, I encountered this beautiful step a quilter took to personalize her work. Besides putting initials on it, she stitched an outline of her hands. ‬

Remembered to take a new picture with my revised hair! Selfies from March 2018 and July 2019 in a favorite staircase at work.

This small blur was a small spider on the run to get under its succulent leaves with a tiny gnat prize!

Today in my little container garden I watched a significant-sized spider eat a bee that it had caught! It dragged the bee deep under the succulent leaves for its crafty meal. It was great.

Q: HOW DO YOU CALCULATE THE AVERAGE FACTORY OUTPUT OF A LIST OF HOLY CITYS

A: MEAN THE SEES OF PRODUCTION

I am sometimes interpreting the success of my container garden by the size of the spiders making webs in it. So far they are mostly tiny, pin head size, but I saw a slightly bigger one today and it was good. I also see a couple of cocoons tucked into my ice plant leaves! Few bees though; most of my wildflower seed mix plants dried up before they flowered.

@kioskwitch a father and son duo working in the late 1800s made hundreds of glass anatomical models of sea life and fruit and atoms, which were tossed out or left to languish in closets when sturdier plastic models became readily available. The Blaschkas were adamant that these were just everyday models and not very impressive but every single one looks like an art piece and they're gorgeous and accurate. Their techniques have been completely lost

Also, I asked for the fingerstick to be on a specific part of my finger that would minimize it disrupting my harp practice, and I’m practicing my harp now and relieved that it doesn’t interfere at all. Just need to work out the brain thing.

I tried giving blood today, but I couldn’t because I felt lightheaded even just at the fingerstick for checking iron. It’s ok, and it was a nice way to observe the fifth anniversary of the Isla Vista incel murders with an effort at a gift, instead of thinking about them too much. But difficulty around medical stuff is a real weakness in my interest in supporting disaster response (both natural and human-made), and I hope to get better at this.

Happy to have made progress on repairing my duvet cover quilt my grandma made in the 70s with mostly vintage-at-the-time fabric. My mom and I talked to the fabric shop staff and learned the key is ironing fusible interfacing into it as reinforcement, *then* sewing in patches! My mom had a bit of 1949 interfacing that was fun, but this new interfacing product is amazing and soft and works well. Left it at my mom’s house to work on next time I visit; might write it as a blog post when I’m done?

This is the Eternal Bird Court poster that used to be abandoned in a corner of my office until I recently decided it was mine (by http://vickisawyer.com/).

I lived in Isla Vista and still love it so much, this odd half square mile of utopian dreams and poor planning and lovely parks and loud parties every Thursday-Sunday. It still hurts, after five years of processing, to open things like https://www.nytimes.com/interactive/2019/04/03/world/white-extremist-terrorism-christchurch.html and know where my Isla Vista is in the story of alt-right murder.